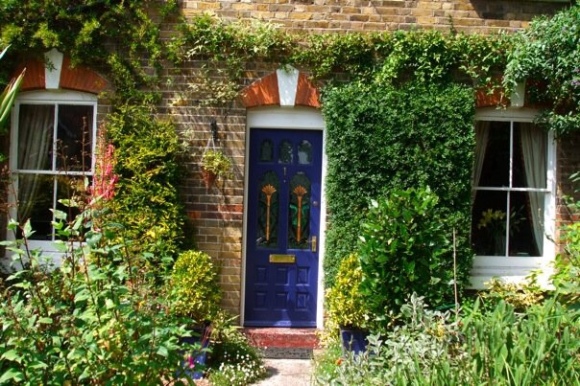 The Blue Door was a house with history and I had history, too. We suited each other. Yet I didn’t realise until some time later how much history we had in common. It was during a conversation with my grandfather that the penny finally dropped but, as I said, that came later. Visitors to the house, where I spent several happy years, often came to find out more of its story. They were generally welcome. In any case, invited or not, there were plenty of visitors from the beginning. Here’s a short account of two uninvited people on the doorstep.

One morning, half-way through marking a pile of student essays and really looking for a distraction, my thoughts were answered by a knock on the door. On the doorstep stood a very well-groomed elderly woman. She smiled broadly at me as I asked how I could help her. ‘Oh no, dear, it’s how I might help you. That’s why I’m here.’ I invited her in, she smiled again and said it wouldn’t be necessary, that she wouldn’t take long but she just had to tell me something. I smiled back, professionally, fearing ‘The Watchtower’ or worse, and took a deep breath. She spoke: ‘You’re not alone here, but I do believe you’ve realised that already, haven’t you, dear? It’s a full house for sure, but you’re surrounded by those who love you and it’s quite a gang. Of course, there are a couple of rogues in there, but they are proud to be your family. Not to worry when the floorboards and doors creak, but I don’t think you do, do you dear? Welcome home, that’s all they wanted me to tell you.’ She left. I closed the door, made a cup of tea and went back to marking essays.

One night, coming back late from a party, I saw a large black shadow on the doorstep. About a metre long and slightly less in height, the shadow fell where it didn’t ought to. I drew closer and saw that the shadow had shoes, attached to feet on drawn in legs. I drew even closer, despite thinking it was a stupid thing to do, and realised I’d not be able to enter the house without climbing over or, for that matter, even through the shadow. So, I spoke to it. ‘This is my home, I want to go inside and go to sleep. You need to leave now.’ It stretched out and up to about two metres in height and I saw that it had arms and a head. There were even deeper shadows where its eyes might have been on what passed for a face. It made no sound, gave no glance, left no trace as it slipped past me down the path. I stepped up onto the doorstep, turned the key, went inside and made a cup of tea before going to bed.